Nashik is one of the largest and most economically viable and clean cities in India. It is located in Central Maharashtra and is a hub for citrus fruit cultivation and export. Another sector that has had a steady growth from this area is the wine making and exporting sector. The city is home to some of the warmest and kind people one will find anywhere. The administration of the city is handled by the Government of Maharashtra, which is elected by the people every 4 years and the civil amenities, is looked after by the Nashik civil body which is also elected by the people every 4 years. The article will delve deeper into how the entire administrative setup of the Nashik administration works. 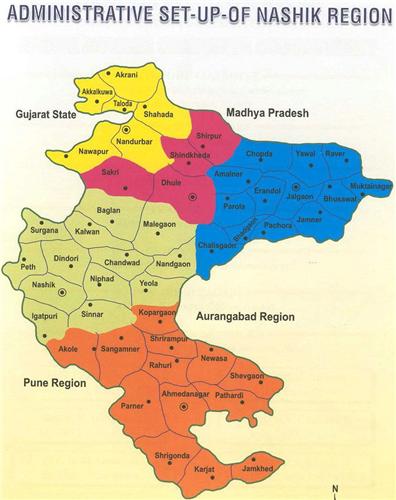 The laws that govern the land of Nashik are established by the government body based at Mumbai, Maharashtra (the issue relating to the sate list) while some issue are governed by the central government situated at New Delhi (these include matters on the concurrent list, as stated in the constitution). The head of the administration of Nashik is the chief minister of Maharashtra which is currently Mr. Prithvi Raj Chawan while the figurative head is the governor of Maharashtra.

The Nashik Municipal Corporation has a number of divisional offices, these were set up so that people living in the suburbs of Nashik or at a slight distance from Nashik (these are areas that come under the purview of the Nashik Municipal Corporation) did not have to take the trouble of travelling all the way to Nashik to have their needs met. There are a total of 6 divisional offices namely at Satpur, CIDCO, Nashik (East), Nashik Road, Nashik (West) and Panchavati.

One interesting fact about the boundary of the Nashik administration is that there were almost no boundary changes of the taluka or district between 1901 and the year 1948. Only a few years after independence was the district again rearranged to make it more efficient and far more capable. Currently the district of Nashik covers a total area of 15,530 sq kms.

The town of Nashik, like any non metro city has a collector and there has been a long list of collectors of Nasik since the pre independence times. A total of 97 collects have held this prestigious post till date. The famous Sinhasta Kumbh Mela also comes under the purview of the Nasik district administration. This is a truly challenging feat for the administration as they have to not only manage the large amount of people coming in but also make sure they are safe and have all the basic human need.