The tourism industry of Nashik is blooming day by day. The land is dotted with scores of attractive sites where visitors can spend some unforgettable moments with their near and dear ones. Such beautiful sites lure the attention of tourists. Pandavleni Caves are one of those most popular places of tourist interest in the city. The site is situated on the top of mountains. The destination is located at a distance of 8 Kilometres from the city of Nashik. The caves receives huge tourist footfall from different parts of the world. It is also a famous religious destinations for Buddhist followers. 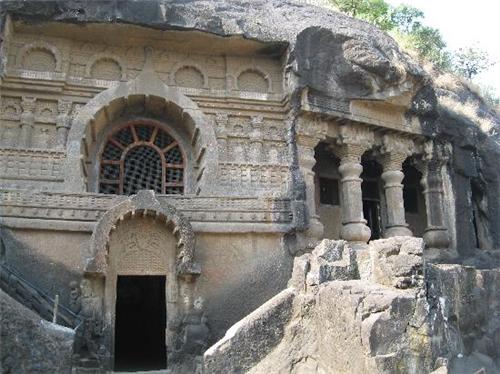 Pandaveni Caves also known as Trirashmi Caves were constructed between 1st century BC and 2nd century AD. These caves are one of the premier pilgrimages for the Buddhist in the western part of the country. Pandavleni Caves of Nashik are a group of 24 rock cut caves, which is a rare display of amazing sculptures and inscriptions on the cave walls. Several stone-carved-stairs from the foot of the hill lead to the caves. The entrance of the caves is marked with numerous sculptures.

The walls of the caves feature several beautifuls sculptures of deities. One can witness the ancient inscriptions which date back to 2000 years in Caves – 3, 11, 12, 13, 14, 15, 19 and 20. Some of the caves are connected with one another by rock-cut ladders. In earlier times, these caves were served as Viharas or Monasteries. These caves are visited by many researchers and archaeologists to study and analyse about the caves.

According to the ancient inscriptions found in the caves confirmed that Nashik was ruled by three different kings namely the Kshatrapas, the Satavahanas and the Abhirs. Several sculptures found in the caves depict that at that time these three kings supported Buddhism. The inscriptions on the walls of Cave No. 10 indicate that the king Ksatrapas defeated the Satavahanas in 105-106 Century BC.

How to get there:

Pandavleni caves are located on the top of Trirashmi Mountains. From the base of hill up to the caves, one needs to trek for about 25 minutes. Being located in the hilly area, the place offers pleasing environment and is a perfect place to relax and refresh.