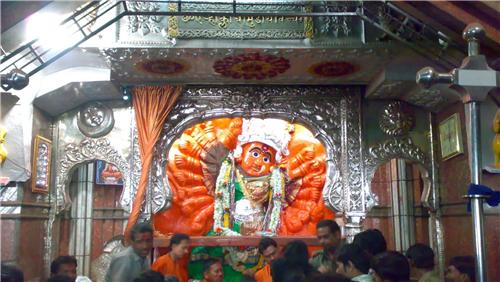 Nashik is a beautiful place located in the north-west part of Maharashtra. It is a religious destination which is mostly visited because it has many more tourism places near to it and one of such places is Saptashringi.

Saptashringi is an extremely beautiful location which is mostly visited by Hindus and it is located around 60 kilometers away from Nashik. As per Hindu mythology, the deity Saptashrungi Nivasini resided within the seven mountain peaks, as the name Sapta means seven and shrung is meaning peaks. This place is situated in Nanduri, Kalwantaluka, a very small community near Nashik. Numerous disciples come to this place on daily basis. This shrine is very famous as it is one of the "three and half Shakti Peethas" of Maharashtra. This shrine is also one amid the 51 Shakti Peethas situated on the Indian subcontinent and is a location where one of Sati's (first wife of Lord Shiva) limbs, her right arm is stated to have fallen. The view of Saptashrungi Temple is as a two storied shrine with the Devi enshrined in the top floor. The Devi copy is carved in a cave at the base of a pure scarp rock face.

The narration of Hindu mythology of Dakshayaga and Sati's self-immolation is said to be the story of source after the Shakti Peethas, the godly shrine or chair of Parashakti. As per Hindu belief, Shakti Peethas were formed due to the dwindling of body parts of the corpse of Sati Devi, when Lord Shiva carried it and wandered around the world in deep sorrow. It is believed that Sati Devi's chin had fallen here. There is a Kalabhairava and Shakti shrines associated with each Shakti Peethas. It is also known that the Kalabhairava of Saptashrungi Temple is Vikritaksh and Shakti addressed as Bhramari.

Saptashringi is visited by many tourists every year for its spiritual relevance and is admired by mostly Hindu visitors.

If you are planning to visit Nashik then do not forget to visit Saptashrungi shire. Visiting this place is little hectic as it requires to climb steps to reach at the deity’s place. Hence take very good care if you are visiting along with your family. Older persons should be escorted rather than climbing along. Kids should be taken care of by their parents and should not be allowed to move alone. Tourists who are visiting this place should take care that they behave wisely with the local vendors as they sometime gets wired if things not purchased from them.

Overall, we can say visiting Saptashrungi would be definitely a pleasant experience and you will be blessed with the divinity.